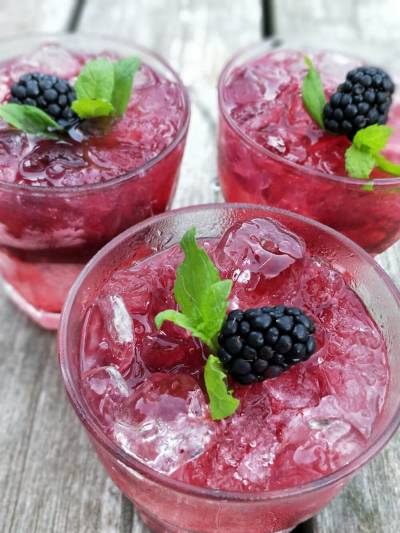 Creme de Mure is a blackberry liqueur, which among many things, is one of the key ingredients in a Gintossen favouritecocktail, the Bramble. And luckily it is very easy to make yourself!

It goes without saying, that you will need to obtain some blackberries! If you have access to fresh berries from the garden or the neighbors blackberry bush, then berries from here are to prefer - however frozen berries can easily be used as well!

Toss your (defrosted - if you go with frozen) blackberries in a clean jar. Squash them good, with your muddler, and pour over the vodka (and maybe Cognac) after which, you add the lemon zest. Close the lid and set aside into a cabinet, to avoid direct sunlight, for 2 - 3 days.

After 2 - 3 days you pour a little at a time, into a fine sift and squeeze as mush as possible through using the backside of a spoon, into a bowl. A the sugar syrup and stir - and you are done :) Pour the finished Creme de Mure on to a clean bottle and keep it in the fridge, where it will last for about a month - if you can keep it from being used up, for that long.

We promise, that we will take some pictures the next time we make a Creme de Mure, to show in this article so you can see each individual step in the process! Until then, you will have to do with an image of a Bramble, made using our own homemade Creme de Mure!

We use and recommend

who is producing amazing spices, which both smell & taste fantastic as well as being produced sustainable, and are therefore extremely suitable for Gin Tonics, and other drinks....!

This work is licensed under a Creative Commons Attribution-NonCommercial 4.0 International License. This means you are free to use everything, as long as you credit us by name and link, and never use the content commercially.